So this finally happened. Just a simple, one versus(?) one game that we didn’t actually finish. I subjected a friend to this, as he was oddly willing to participate. The rest of the group was caught up in a rousing conversation about anime, which was probably a better time than this.

I pulled out the rule cards and 10 themed decks. My friend picked the “A Team” Dragonball deck, probably the safest choice, though he had no reason to know it. Cards were shuffled, tokens placed, and the game began. It didn’t take long to realize this was a game built more like a task list. You needed to go scavenge things, then get items, rinse and repeat until some conditions were met. Unfortunately the utility of the cards and the basic rules don’t leave a lot of room for randomness, strategy, or decision making. Go to a location, grab a card, and resolve it, but none of the resolutions were particularly exciting.

There were two other times I played Ani-Mayhem on purpose. The first was long ago when I maintained an actual deck, using the rules of the old times, with a 99 card deck full of overpowered (to the point of being fully unnecessary) regular cards and severely under-powered disasters. The solitaire aspect of the game in combination with the freedom to customize the deck is really the core issue. You can make the game as easy on yourself as you want (there are plenty of extremely weak “major” disasters to choose from), and there’s no incentive to make it harder on yourself.

When I moved to Florida the “local” game store told legend of their own tournament of Ani-Mayhem players. I found the winner of that tournament and defeated them with a loop of Rescues and Angels of Mercy that allows an infinite loop of Wrath of the Eye of God destroying all disasters and other players’ things. 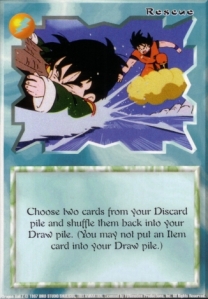 The next time was far more fun. I had constructed a number of theme decks of standard size, and the number of players was such that the disasters on the board became overwhelming, and Everyone’s After Me inevitably led to all of us finally losing after two and a half hours of flailing. 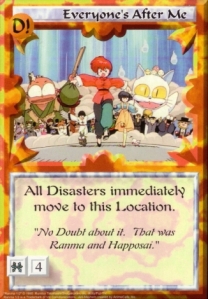 That was probably 15 year ago. My most recent interaction with the game and any other player of it was about two years ago, when I found someone in the Seattle area who had piles of Ani-Mayhem cards, and we both had cards the other needed to complete some sort of arbitrary goal.

Today, I pulled out the decks (ten decks, one for each series featured except for Oh My Goddess, which only had like three cards in the whole print run, and an additional “B Team” DBZ deck [warning: sound]), with streamlined rules, and it felt much like watching a reunion concert for a band that was famous years ago, only to realize that they’ve only gotten worse over time, and that in fact you might have mistaken that band for something else in the first place.

There is so very much wrong with this game. It’s wonderful, in a historical sense. Ani-Mayhem, having come out in the mid 90’s in the height of the first wave of companies trying their hand at mimicking the success of Magic: the Gathering, seemed to have very little idea of what it wanted to be.

Game vocabulary is inconsistent. Character stat indicators show up in places they don’t need to be, like Global effects appearing to have movement scores, or flash effects where the wording of the effect has nothing to do with the icon displayed. Words on cards are randomly highlighted for importance, regardless of where they appear. Flavor text may or may not be relevant to the game rules depending on what is written.

My personal favorite is the font. The font is horrible. Recoom is the prime example, as at first glance you might be convinced that his name is “Roooom.” The extremely loud backgrounds for them can make it painful just to read, and the white outline doesn’t do it many favors.

Oh, and health. Of all the character attributes, health is hidden. Imagine if in Magic: the Gathering Llanowar Elves (a 1/1) had 1 power, 1 toughness, and 1 of a hidden stat called “health” that was based on its printed toughness value, and the toughness value reduced the damage from incoming attacks. That’s how the Defense and Health scores interact in Ani-Mayhem, and it’s somehow both simple and frustratingly unnecessary.

Apart from all of the above, what I realize now that the game really suffers from is something I really only realized tonight. Almost the entire library of cards were designed based on the image or event in the series, rather than what would make an interesting card or mechanic. By trying to keep close to the spirit of the shows they were featuring, they made a game that, once you really got into it, was really quite bland. I can’t think of another card game where the art inspired the card rules, rather than the other way around, but it’s the entire basis of the game and why any given deck, even when restricted to single series, end up hitting a power threshold as early as turn one that stops any future decisions from being at all difficult. But at least they didn’t go the Dragon Ball Z card game route of screenshot roulette for their cards.

So why do all this, and what now? I’m likely to sell all of these, save for a few favorites I want to keep around in my little display of old card games from days gone by. As awful as the game was, this was a fun little bit of nostalgia to share in the suffering of. Time to purge this from the house and move on to something new, and like a writer or director, sometimes the best inspiration for making something new is to see just how poorly it’s been done in the past.

Bonus: In digging for images for this post I rediscovered ani-mayhem.com. While this fan site seems to have frozen (I mean, there’s not a lot of actual updates happening), I cannot fully express my horror at a link on that site leading to アニメイヘム.com. Yeah, you’re reading that right. I have no idea how they did that, but they call it “Ani-Mayhem 2010” and it’s apparently still being updated. Someone out there other than me still cares, it seems, but I’m finding that out far too late (and pretty much every other fan-made cards I’ve seen have been kinda horrible. Whatever the case, I’m tossing in my hat. Go on an keep chasing that dream, whoever you are. Surely there’s an Ani-Mayhem 2020 just waiting to get… whatever it is you’re doing to that.

Ani-Mayhem was a game that existed because of the MTG boom in the mid 90’s. Everyone wanted in on that cardboard cash. Pioneer, who had gotten into the business of licensing Japanese animation for the US, decided to slap everything they had the rights to into a game. This included some things probably dozens of people had watched, but also had a lot of what we would consider classic anime. Dragon Ball Z, in particular, is one addition that they tossed in as a last ditch effort for traction. They had just gotten the rights for some distributions of DBZ (thought I don’t believe for long), but while the DBZ set proved to be fairly popular, they ended up discontinuing the game. It probably didn’t help that the overall card power in the DBZ set was so much higher than the first two sets. A new DBZ card came came out the next year, and while it had horrible production value it was far more popular.

Ani-Mayhem was a mess, but for some reason I found it endearing, and ended up collecting most of the cards, including all but I think two of the promo cards. Once the game was discontinued I remember picking up some set one booster boxes for $15 each, which was certainly a good way to pad out the collection.

The rules changed with each set, though rarely being much better than the previous version. The rule book was like the old MTG rule books, but without all the flavor. Sixty pages of rules and examples for the complicated tracking of everything ever and all the options you had in any given situation. It was very much like they were trying to translate a video game RPG into a card game, but with the D&D annoyances of party splitting and characters actually getting killed.

Last year I took a look at all the cards I still had and decided to make probably-functional theme decks for each of the anime that were in the game, except for Ah My Goddess, which only had like three cards in the game. DBZ got two decks, one for the A-Team and one for the B-Team. Ten decks in all, with 67 cards total per deck (down from the DBZ minimum deck size rule of 99). So now I was left with the problem of boiling the rules down so that I could maybe someday get someone to play it.

So I’ve done just that, and got them compressed down to four standard card-size blocks of rules. I purposefully ignore a lot of the rules for options (like running away from combat and such) for the purpose of streamlining them. I’ve made a few decisions on keywords and such to make things make a bit more sense. Reducing deck locations from 7 to 5 also helps ensure that multiplayer games won’t take forever. The last time I played a multiplayer game was sometime between 2002 and 2004, and it took us 3 hours to finally, as a group, concede defeat to the disasters.

So I’ve finally managed to sit down long enough to do this, fiddling with phrasing and font sizes to make everything as short and compact as possible. I’ve made the assumption that most of the icons in the game don’t need explaining, and anything I’ve missed can be figured out on the fly. Here’s what I’ve managed to put together. In the really strange event that you’re one of the ones of people on the Internet who still look for things relating to Ani-Mayhem, you’re welcome to use these yourself. 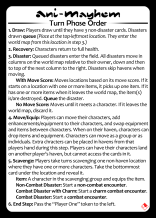 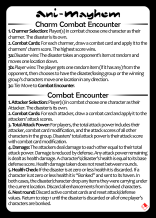